What Does a Firefighter Do?

If you tend to run toward danger instead of running away from it, here’s a job that can channel that energy. A firefighter, also known as a fireman, is a highly skilled first responder who works to fight and extinguish fires. A firefighter also takes steps to prevent fires and act as an emergency medical technician (EMT).

Firefighters are almost always the first officials on the scene of a fire, car accident, hazard material spill or other emergency. The work can be very dangerous.

These workers — many of them volunteer firefighters — remain on call at the fire station, where they sleep, eat and perform other duties during shifts that often last 24 hours.

Firefighters learn basic skills at fire academy, but each new fire adds to their education and training. (Credit: Matt Chesin/Unsplash)

A Day In the Life 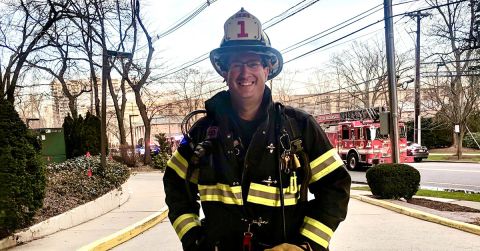 A Day In the Life

"As long as I can remember, I’ve always wanted to be a firefighter," says Jeffrey Kaplan, captain of the Englewood Fire Department in New Jersey. "The best way I can describe it is that I was the little boy who ran to the window when the firetrucks went by. I just never stopped running to the window."

The 43-year-old loves that no two calls are alike. Read on for more smart advice for anyone considering a career as a firefighter.

Most employers require a high school diploma and training in emergency medical services. Prospective firefighters must pass written and physical tests, participate in interviews, complete training at a fire academy, and earn emergency medical training (EMT) certification. Applicants typically must be at least 18 years old and have a driver’s license. They must also pass drug screening.

Firefighter Training in Your Area

Explore Other Jobs In Public Service